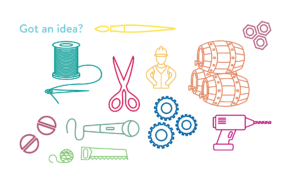 A group of more than 50 makers and manufacturers gathered at Liverpool’s state-of-the-art Sensor City for the OpenMaker launch evening. A collaboration between the University of Liverpool and Liverpool John Moores University, the centre bills itself as a global hub for sensor technologies; a collaboration space for people who want to come together to tap into the Internet of Things, using the development of sensors to spark innovation.

‘Sensors and the Internet of Things are driving the next wave of technological innovation,’ says its executive director, Alison Mitchell. ‘By connecting digital devices to the physical world around them, the impact of these emerging technologies on our data-driven society is limitless.

‘We understand how hard it is for businesses to collaborate. Big businesses need a spark that is sometimes only possible through collaboration,’ she said.

Using examples including sensors to determine if vulnerable people are dehydrated and at risk of falling, Sensor City tenant Terry Nelson, managing director of Liverpool-based Aqua Running International, took up the mantle. Having created a buoyancy bodysuit that allows anyone with injury to train in water with no impact, Aqua Running now works with Real Madrid, alongside a host of Premier League football teams. ‘Players can run and sprint in the pool weeks before they can train on land,’ he says. He also works with children with cerebral palsy, using the suit to promote correct biomechanics to give them confidence and security in the water, and allowing physiotherapists to work with them in a way not possible on dry land.

Nelson himself is a former LFC footballer, paratrooper and World Transport Games champion. With his own health problems, he showed a film of himself running in a swimming pool, just ten days after having his right leg amputated.

Finsa UK managing director Rafael Willisch followed, talking about collaboration between large and small businesses, using Ken Robinson’s ‘divergent thinking’ as an example of what small businesses can offer larger organisations. He used examples included Ikea and TaskRabbit to show how the organisation is moving away from the DIY model, and is using augmented reality to develop its services for customers.

Beautiful Ideas Company’s Erika Rushton rounded-up the evening by talking through the OpenMaker process, and highlighting examples of support, collaboration and developing an ‘entrepreneurial economy’. ‘It’s an exciting project – a fusing of scalable or replicable industrial processes with state-of-the-art technology, and the ingenuity and creativity of individuals or groups of makers. It will be through these new processes, ideas and institutions that a revolution in how things are made and manufactured comes about,’ she said.

The application deadline for OpenMaker is October 18, and you have to sign up to get involved! Find out more by completing this quick, easy sign-up form…