Sound engineer John Lancaster co-runs Birdshit Records. As a maker and a manufacturer, he makes his own equipment, from amplifiers to studio equipment, and is currently working on a project to cut vinyl records.

John’s project idea revolves around the manufacture of vinyl records. Normally, vinyl involves a minimum pressing quantity, with an order of at least a few hundred discs for recording artists and creatives to distribute vinyl records of their work. His plan is to use his own lathe to cut individual copies and to accept a minimum order of one copy. 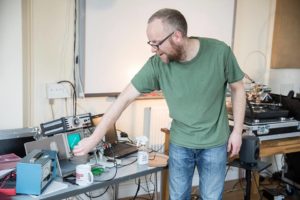 Typical, his clients are hip-hop artists who need single copies of 12 inch records to use in scratching; creatives who need them to use as promotional tools; and musicians and artists who aren’t able to – or simply don’t want to – record in such large batches.

John feels that ‘there’s a certain mystique’ to the world of vinyl, and insists he’s not a ‘vinyl fetishist’. He enjoys being part of a process that he has created and developed himself, that allows an artist to be part of the journey from composition through to the production of the sound object. He likes the ‘hands on’ process of cutting individual discs and working the lathe. He says: ‘people are more likely to listen to something you’ve made if you put a record – putting a tangible object into their hands is more powerful than, say, sending a link to Sound Cloud.’

John aims to offer artists and creatives a bespoke service that gives them access to vinyl production, which they can scale up if they want to. He wants to de-mystify a production process which, although complicated, has several elements that anyone could try. 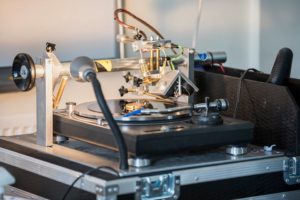 John’s current lathe has been designed and built by a German jukebox engineer. For a range of reasons, this has led to the production of these lathes being something of a ‘closed shop’.

In the US particularly, there is growing interest in restoring old disc cutting lathes, some of which date back to the 1930s. They remain popular on ebay and are in short supply, which John suggests could be linked to the rise of World Record Store Day. John’s dream is to have a roomful of these very specialist lathes and train up artists and creatives, giving them complete control over the means of production of their creativity.

John’s links with musicians across Salford and Manchester – and work with Band on the Wall and Islington Mill – led him to the OpenMaker project. Longer term, he would like to collaborate with fellow creative producers and look at coming up with a portable prototype that could fit in a flight case and be used anywhere. His ideal prototype would also include a digital element to combine old and new technology, and he’s in the process of identifying creatives who would be interested in working with him on this long term project.

• developing and building an open-source, digitally-controlled lathe (or at least one of the key lathe components)

• developing a touring ‘pop-up’ record shop, where records are recorded and manufactured in situ…

• developing sustainable, alternative materials for the discs themselves.