‘My whole set of life experiences have been brought together to get me here – focusing on possibilities through numerous avenues of origami,’ says Angela. ‘It has played its part in the technological revolution – I once met with world famous origamist Robert Lang, who is working with NASA to develop a shield to block out light pollution from earth to enable better vision into space. I also worked in one of his classes – he developed a laser punch that makes small holes in paper, visible when held up to light, allowing the person to fold along the perforations, enabling invention and expanding possibilities. There is a lot of innovation involving origami, especially in terms of technology. It has played a fundamental role in the miniaturisation of technology: from the folding of DNA structures to the folding of maps.’

Origami pulse is working alongside manufacturer Re-wrapped, which has created a wrapping paper weighing in at 80gsm (a better weight for origami) rather than its standard 300gsm. Its paper is made solely from 100% recycled materials, using vegetable inks and environmentally-friendly products.

One of the key parts of Origami Pulse’s plan is to develop its own paper, printed with crystalline chemicals that represent the happiness chemicals in the body, such as dopamine, and to represent these through happiness ‘symbols’ – so people will literally be folding happiness. 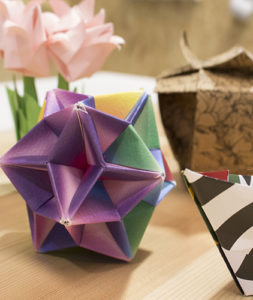 Angela’s recent teaching experience at the Open Door centre has led to an interest in how people see origami and assume that they can’t do it, before finding that they can, and the benefits this sense of achievement can have. The experience can be ‘life changing’ she says.

‘I want to take a role in origami becoming recognised as a feel better tool –particularly in relation to mental health, and to publish a book on how origami changes lives, with statistics,’ says Angela. ‘We are generating statistics as we go along, so hope to collaborate and write this book, combining information about the creation of new neural pathways as a result of ‘making’ with the production and uses of origami. I also hope to travel the world teaching origami, and to to initiate a global mobile origami community through our website.

‘The main challenges are to finance publicity, finding the time to develop the enterprise and funding the development period,’ she says.

A parallel interest lies in the greetings card industry. ‘In the UK, it’s responsible for employing more than 100,000 people, so – even though paper may be considered a dated material – it’s an area that is still massive,’ she says. ‘No other country has such a long and widespread tradition of sending cards. An average of 33 cards are send by each person per year and card making is the number one hobby in Britain. There are not existing physical cards in production for people specifically with mental health issues. One in six people have experienced a common mental health problem in the past week. Between four and ten percent of people will experience serious depression in their lifetime.

‘We are planning an ‘opening up’ card,’ says Angela, ‘designed specifically for mental health issues – the idea being to allow those suffering to give something to people to say they are not feeling so good. 75% of people with mental health problems will never receive a Get Well card, and say they would feel better for having received one. As part of our product range, we plan to make Get Well cards for those suffering mental illness.’

Alongside workshops and a presence in hospitals, Origami Pulse is developing a website to build up the interactive element of their enterprise, enabling people to become part of a network, and be able to contact others through the site.

‘The international element is important for us. I’ve worked in the States, teaching and folding, and visited a convention in New York. I’ve also visited Tokyo, and there are conventions all over Europe, including one with a science and art theme, at which Dr. Lizzie Burns will be presenting a paper as a result of her work with us. There are definitely opportunities to make further links and possibilities through OpenMaker.’

‘I think OpenMakers values are great. We’ve met so many people – it’s amazing how connections create a sense of wellbeing. The open-ness of ideas is fantastic. Just this little bit of involvement has made me believe my ideas can come to fruition,’ she says.

Paper could be considered the first industrial revolution,’ says Angela. ‘We wouldn’t be where we are today without it. It may be obliterated in the near future, but origami could be its swan song, as it becomes less prolific and more as a creative tool and material of beauty.’