Sensor City is a partner in the LCR4.0 programme, which aims to put the Liverpool City Region at the heart of an evolution which is transforming production in the modern world economy. Focusing on what’s known as the ‘Fourth Industrial Revolution’, its aims dovetail closely with that of OpenMaker, and our ambition to transform the production processes and models on which our industrial society has been built…

Alison Mitchell moved to Liverpool in February 2017, to join the team at the city’s newest tech-innovation centre – Sensor City. Sensor City is a collaboration between Liverpool John Moores University and the University of Liverpool, fostering the creation, development and production of state of the art technologies to be used across various sectors. 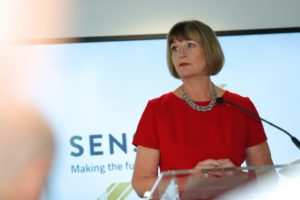 With over 25 years’ experience in the Internet of Things, Alison moved to Sensor City from BT where she worked for 12 years as the CEO of BT Business. Finding a nice fit in Sensor City, Alison was drawn back to Liverpool – where she obtained her bachelor’s degree in Geography – because of the city’s rich making and manufacturing heritage.

“Sensor City isn’t just a place for people to be based – it’s very much plugged into the wider community,” says Alison, “Its enthusiasm for working with students from the universities is great, it encourages with the fantastic ideas that these students have,” she says. The importance that Sensor City puts into helping entrepreneurs is one of the reasons that Alison left a good job at BT, to relocate to the city.

She describes the Sensor City setting: “It’s not just an innovation hub, it also has laboratories with anti-static flooring where people can work at benches in offices. There’s a mechanical lab with a 3D printer, drilling, welders, CMC, milling and grinding machines, to create actual physical prototypes and products.

“They also have on-site engineers to assist,” she says. “Some companies will come to Sensor City with designs they want made; others need help or assistance with their products. And there’s the possibility to print circuit boards on 3D surfaces and the ability to test products through extremes of temperature and shaking machines.”

The list goes on; “there’s an on-site laboratory with microscope facilities; equipment for users to test solder levels; and there’s even a software lab in the pipeline which will help people to make their products, some of which will be very specialist, so the onsite engineers are expected to lend a hand.”

Alison’s personal experience dictates the way that she works at Sensor City, understanding that you must move quickly to get products to market in this field. “It’s really important to stress that the Internet of Things now exists in nearly every area of life,” she says. “For example, it’s through technology that your food doesn’t go off.”

She mentions Sensor City’s current projects; one of which is developing sensors to put into packaging which will stop crushing – for example the packaging around flowers to keep track of and check on their environment during transit and sale. 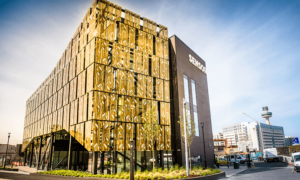 The launch of the Liverpool arm of the pan-European OpenMaker initiative was held at Sensor City earlier this year, uniting Liverpool’s maker community with the centre’s manufacturing capabilities. “The OpenMaker programme can further enable the sharing of skills and invites the maker community to use the facilities here at Sensor City,” says Alison. “We’re an Internet of Things community, so it’s really important to also create a maker community alongside that, to foster collaboration.”

Going forward, Alison wants Sensor City to attract companies which might not normally consider Liverpool as a base and wants to showcase the fantastic assets that they have in the centre: “the most exciting thing is to have successful companies stay here, and to be able to reference Sensor City as part of their success.

“I’m really excited to be back in Liverpool, and I’m proud of our brilliant maker community and the knowledge community that I am a part of at Sensor City,” she says.